skip to main | skip to sidebar

Nick Rowe has devoted umpteen blog posts to explaining why he thinks some Keynesian economists go horribly wrong by neglecting to stress that their ideas are set in the context of a monetary exchange economy. On the dubious principle that a picture is worth a thousand words and because creating diagrams is where I have comparative advantage over Nick, here’s what he is saying.

If you need me to explain the first picture you’re not interested in economics so stop reading now. It’s here just to set the scene: when all we need is two dimensions then we just draw a triangular budget set and an indifference curve. 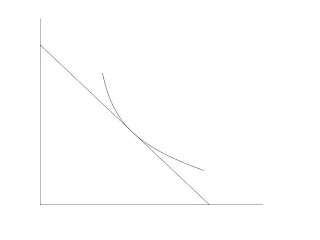 But to understand Keynesian economics we need a minimum of three dimensions, so the budget set is bounded by a plane. If that’s the only constraint then the optimum is the point where the plane is tangent to the best attainable indifference surface, which is not shown; imagine it as a shape like a satellite dish facing out from the origin. (I have indicated where I disagree with Nick by marking the vertical axis “Treasure” whereas he would undoubtedly mark it “Money”. But that’s another story. I’ll call it money anyway.) 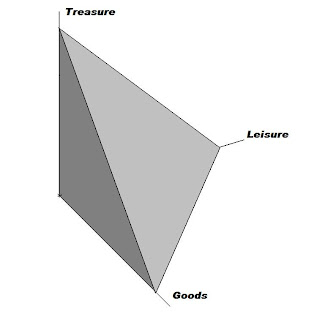 So far so Walrasian. We go Keynesian and repeal Walras’ Law by introducing a preset money wage (and possibly goods price also) and rationing in the labour market, so that the household is compelled to consume more leisure than it desires: 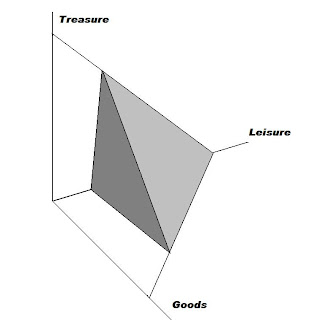 Finally, Nick Rowe’s move: we let Walras re-enter though the back door by allowing workers to barter with employers, selling their brewing skills for beer: 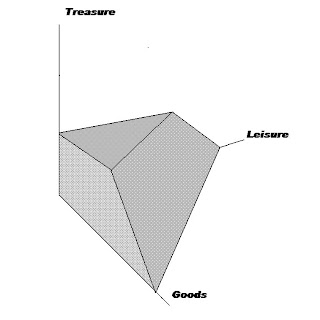 Households are still rationed, so the end result is not quite Walrasian, but the rationing is confined to the market for assets.

[Edited to fix the perspective in the third picture.]
Posted by Kevin Donoghue at 08:52